It is the Friday of a rather manic week so here is a geeky plant post:

This time I want to highlight my favourite scented flowers which, whilst cold hardy, like to have protection from rain in winter in our wet climate. These either get moved into an unheated frame for winter or have a piece of clear plastic propped over them to keep the rain off in our wet USDA zone 8 fairly coastal garden in NW England. Many Alpine flowers, especially cushion forming or hairy-leaved ones, fall into this category. In the wild they would either have a dry winter or spend it under a blanket of snow.

This species I have seen growing wild in several places around the Mediterranean. It is reasonably cold hardy but performs best with protection from too much moisture in winter and again when the bulbs are dormant in summer.

It is one of the smaller colchicum and, unlike many, does not have large coarse leaves after flowering. It is a good plant for a pot in a cold greenhouse where the october flowers can be appreciated fully. They open on sunny days and have a wonderful honey scent. They are also very attractive to hoverflies and bees.

This stock is from a Mike Salmon collection and I have grown it for well over 20 years. 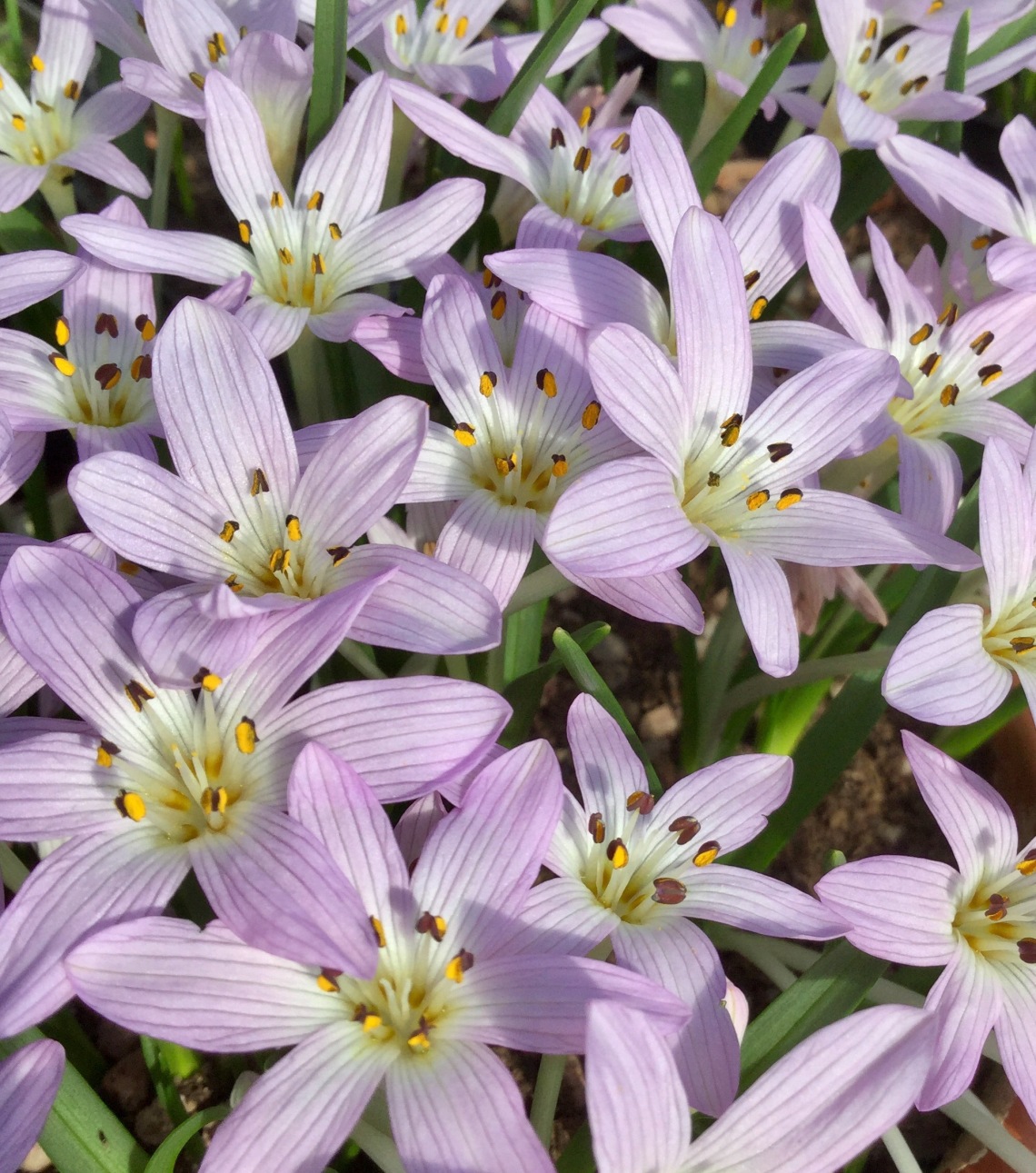 Oxalis is a very widespread genus including some awful weeds. There are a number of lovely Alpine species in Patagonia and the Andes especially. One of my favourites is O. laciniata. It grows in summer from a curiously maggot-like underground tuber. A friend of ours has this species seeding around in his (unheated) greenhouse and kindly gave me a few of the seedlings. It varies a lot in colour, from pure white to dark indigo with all shades of pink and purple in between. For me, however, it is the amazing rose scent which attracts me. 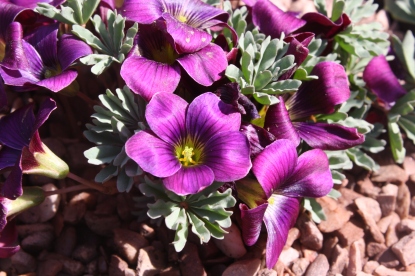 (There are a large number of Androsace suitable for the open garden but here I talk specifically about the tiny tight cushion-forming species.)

Both genera are members of the primula family and both need very careful management to prevent rot from humidity and moulds in winter. Many specialist growers keep desk fans blowing air across them 24 hours per day and rigorously remove dead flowers and leaves daily with tweezers. For me, life is too short, which is why I no longer grow them.

Androsace are found in alpine areas right across the Northern hemisphere (in N . America they are known as Douglasia but reasons for separation are dubious at best). They vary from mat-forming species such as A. lanuginosa which is fine outddors in my garden, through to the tight cushion forming species such as the A. pubesces illustrated below. Many have a fine scent, often f almonds or honey, to attract high-altitude butterflies which are their pollinators.

Dionysia are found, often under cliff overhangs, in the mountains of Turkey, Afghanistan and especially Iran. The plant illustrated is a hybrid involving Dionysia afghanica. A species collected only once, as seed, in the mountains of Afghanistan in 1973. Seedlings were raised at Kew, who promptly killed them all, but not before passing on material to a specialist amateur, Eric Watson in NE England. All the material of this very rare and very difficult plant in cultivation has been raised from the single specimen that Eric Watson raised to maturity. (Interestingly, modern Kew policy would have probably prevented material being passed on to an ‘amateur’), in which case this species would not have lived past 1974 in cultivation.)

Scent varies a lot in Dionysia and is rarely even mentioned in the literature. But D. aretiodes, a yellow flowered and relatively easy species, has a glorioous scent in the spring greenhouse.

Iris hoogiana is one of the Regelia group of Iris and is found wild on grassy mountainsides in Central Asia. Regelia are closely related to the Bearded Iris but require a rather more dry position in summer and (at least in my garden) have no leaves in winter. Though described as ‘easy to grow in the UK’ I find it suffers badly in wet weather. It would be fine further inland I am certain, and numerous named varieties are cultivated in the UK, including a lovely pure white form.

As it is far too robust, and needy of nutrients, for a pot so I grow it in a raised bed that I can cover in inclement weather. The gorgeous blue flowers have a great scent. 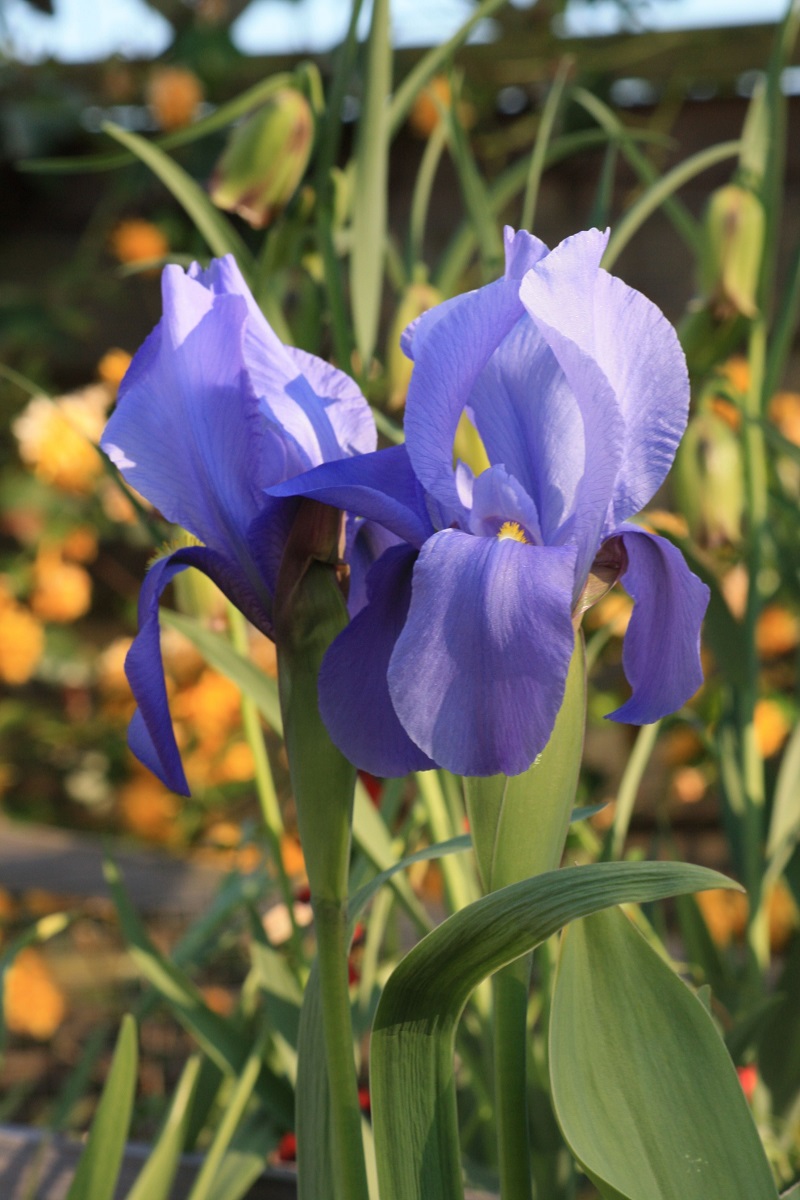 This is such a frustrating plant for me as I really struggle to grow it!

Native to temperate forest of China it grown wild in pads of moss on rocks. It likes a cold winter when it loses it’s leaves and roots and dies back to a dormant ‘bulb’ – it must be kept cold but totally dry in winter. It flowers in March in the UK, with new roots and leaves developing soon afterwards.

It seems to require high humidity and a cool summer but demands perfect drainage at the roots. Too much rain or heat are fatal to the roots.

When successful the flowers have a nice scent of primroses. 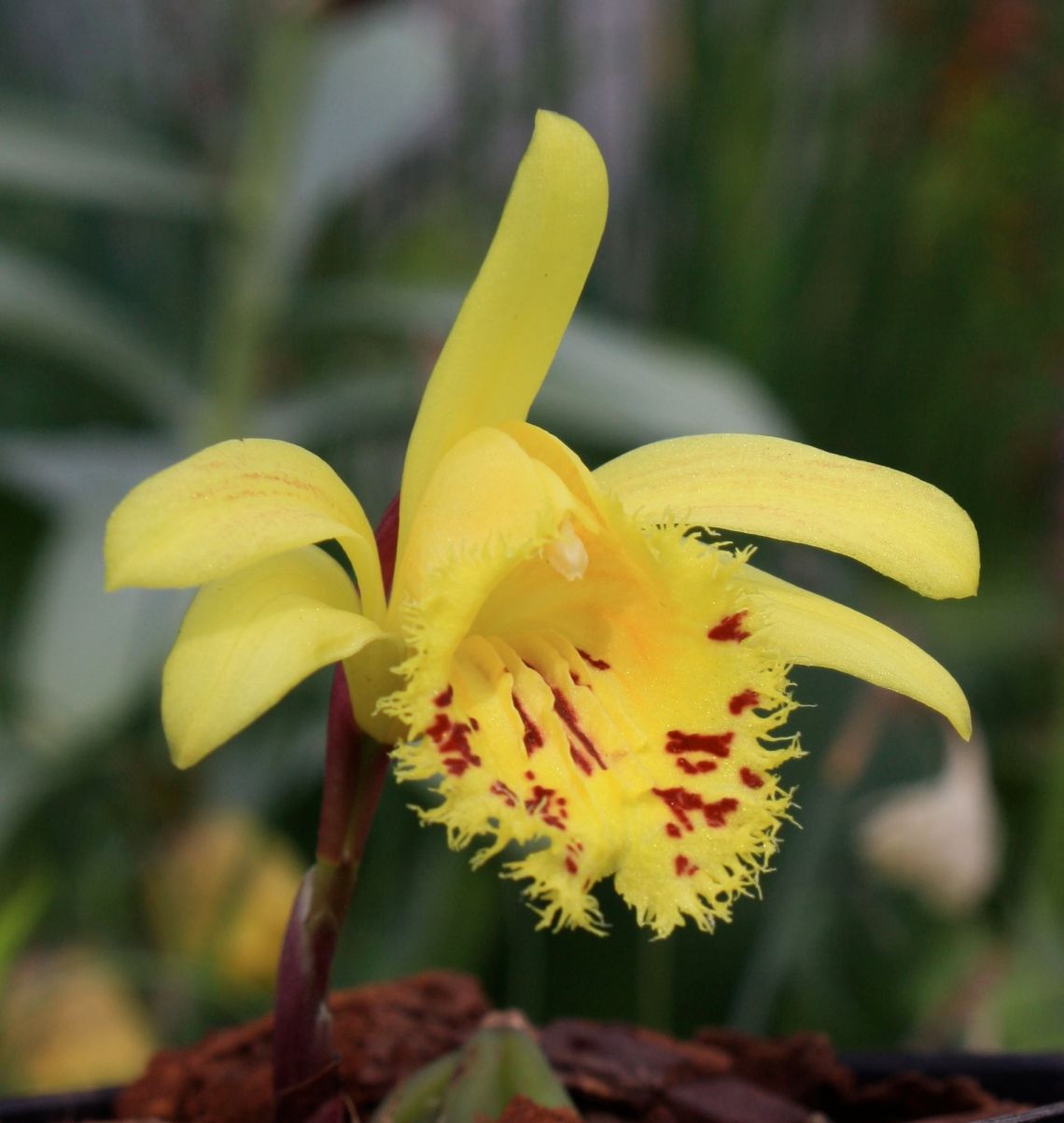 Straddling the drier parts of the Himalaya this small herbaceous perennial is related to Daphne and has a similar scent. It can only be propagated from seed. My solitary plant has been with me for 22 years and is showing signs of deterioration, sadly.

I’d be lying if I said it was easy to grow but I find it fairly straightforward if I keep the rain off it in winter. It requires no protection in the drier Eastern parts of the UK and I do know gardeners here in the West who succeed with it unprotected. 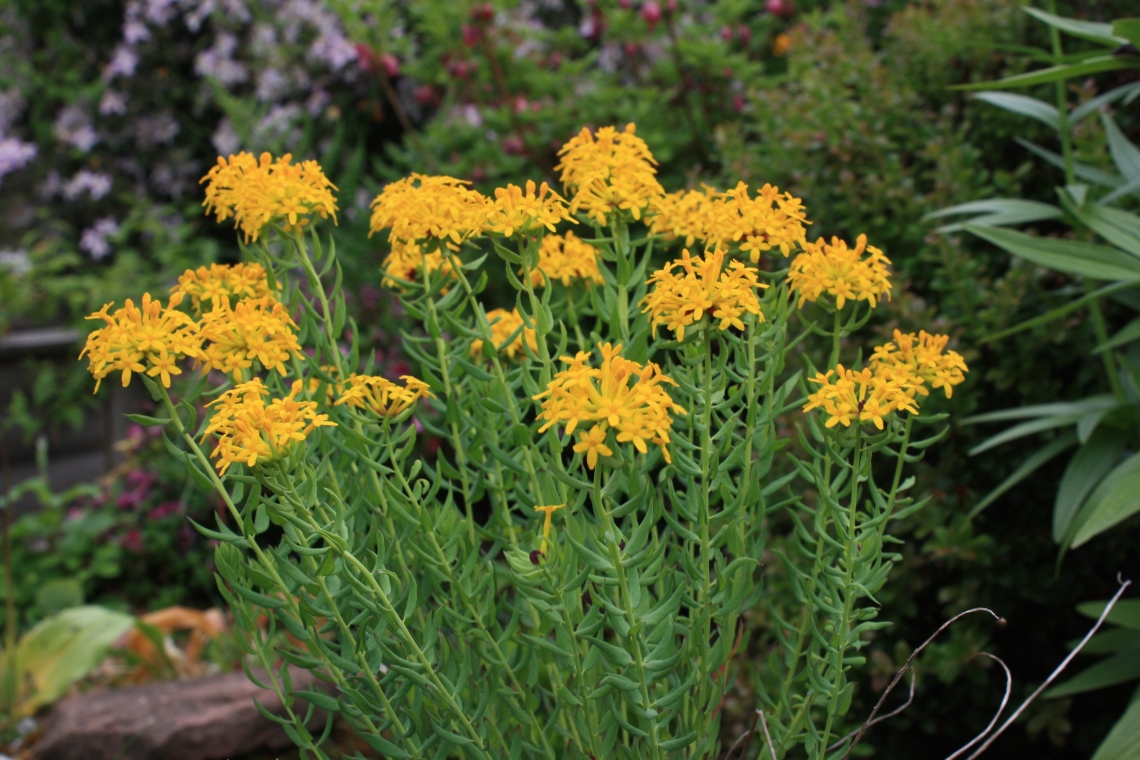 These succulents are related to the Livingstone Daisies commonly grown in gardens. Growing at fair altitudes in the Eastern part of South Africa many are suprisingly cold hardy if kept on the dry side in winter. Their flowers are nocturnal and open in the early evening to attract moths. Their scents are all strong but vary from fruity (pineapple) to a solvent/benzene like scent. They also hybridise easily with each other.

My stock came from the late Lyndsay Deaves who read of my interest in night-flowering Mesembs and sent me her collection shortly before she sadly passed away in the hope I could keep it going. So far they have proven very easy.

This tiny violet from Iran grows in similar cliff crevices to the Dionysia above. It is rather easier to grow, thankfully. The flowers are tiny (second pic has a fingertip for scale) but have an overpowering spicy scent.

It is cold hardy, quite happy outside in summer, but will need protection from too much wet in winter.

One of my favourite scented flowers. Primula reidii is from the Himalaya and a member of the Soldanelloides section of the genus, just like the Primula flaccida I featured in part two of this series.

The scent has to be experienced to be believed.

This is not, however, a long lived or easy plant. With careful water management in winter, frequent repotting and good feeding it can live for three or four years. It can be divided but it is far better to raise new plants from seed if you can obtain it (the specialist rock garden societies often list seed in their annual seed exchanges). I currently do not have it, and feel that this hot summer would not have been to its liking anyway.

As you can see from the pictures, the degree of blue in the flower varies, and pure whites are common. 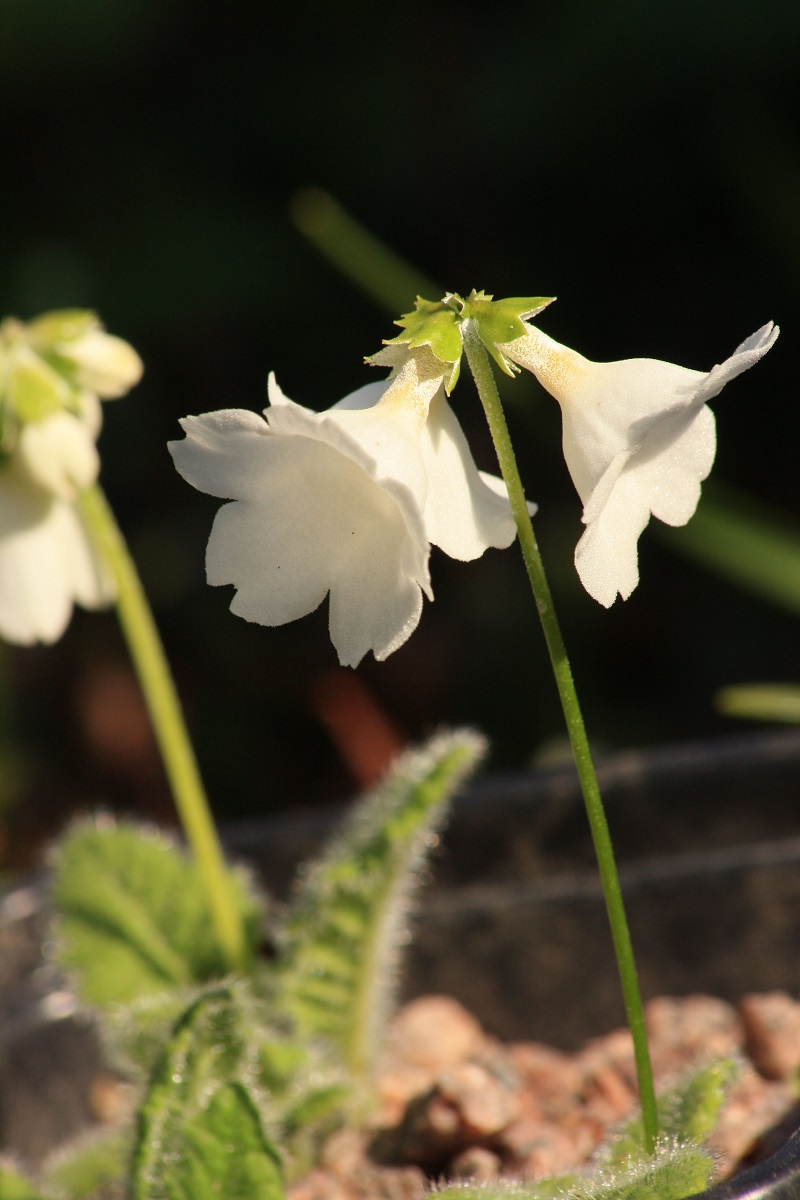