Yes, it is official. WordPress tells me that at least 500 people are deranged or kind enough to follow my blog.

This confirms my suspicions that there are lots of lovable eccentrics out there. Or 500 of you at least.

To celebrate this I decided on a post that includes a bit of everything you can expect to see on here. This gives you new followers a chance to say ‘sod this for a game of soldiers’ and disappear quietly.

Have not had one of these for a while. (For you newbies – basically I am fighting back after living with depression and anxiety for decades. ) I started seeing a counsellor a month or so ago, my first experience of Person Centred Counselling. Until this week I was not sure how effective this was being. At this weeks appointment I described feeling that I was walking a knife edge between a better future on one side, and giving up on the other. The preceding few days had been an emotional rollercoaster from great joy some days, to despair and frustration on others. I was not sure which side of the knife edge I was going to fall on. But since my counselling session great strides have been made. Concrete travel plans are now in place, as well as some other small victories. I am still taking citalopram and it really has helped. My counsellor told me that her impression of citalopram was that as well as easing depression it allows a person’s authentic self to be revealed. I would agree with that now.

I am still doing 5 sessions at the gym each week. Fridays are now not possible due to the gym opening hours changing. Swimming lessons have been cancelled (not by me) for several weeks now, each week for a different reason (pool or staffing issues). They are due to start again June 4th. Recent activity at work has seriously affected my gym attendance some weeks and I got rather out of shape but am slowly bouncing back. Eventual plan is to add a weekly swimming session to my exercise routine on Friday nights or weekend evenings after the lessons are done with.

Things I have been up to in recent weeks.

Holehird/Lowther. We had a day out visiting gardens in the Lake District. These included the wonderful Lakeland Horticultural Society garden at Holehird near Windermere, and the gardens at Lowther Castle 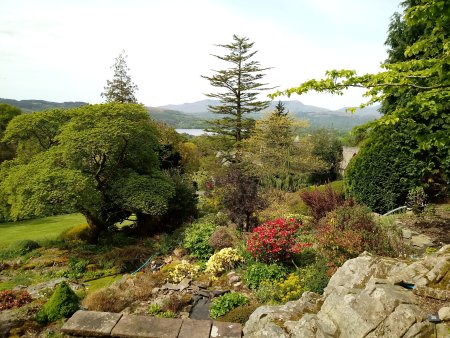 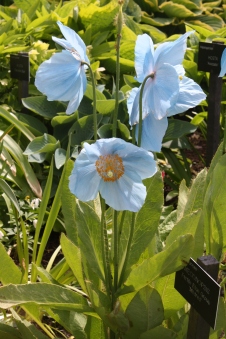 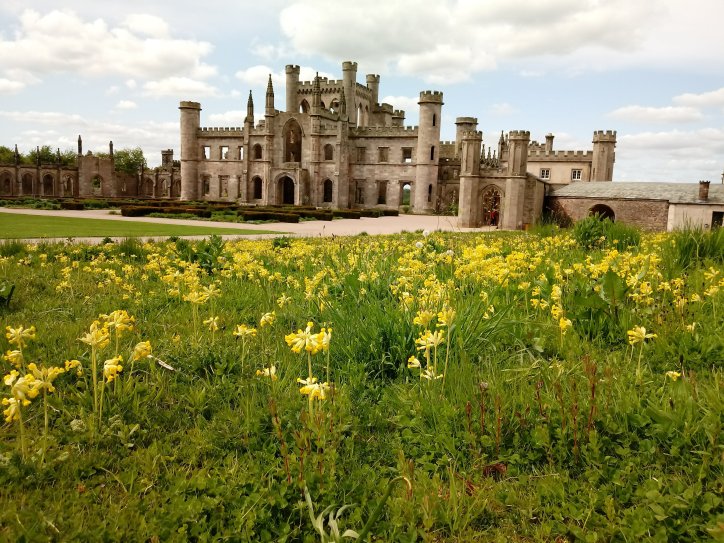 Botanical walk. On Saturday the 19th I went on a botanical walk led by Dr Phil Lusby from the Royal Botanic Gardens Edinburgh. This was organised by Susan’s boss Tom, who had been a student of Phil’s. It set off from Tom’s nursery and visited various nature reserves in the Southern Lake District, including Humphrey Head – where legend has it that the last wolf in England was killed in the late 14th century. Photo from Tom Attwood’s Twitter:  I am the dude in the middle looking like a reject from a Seattle band circa 1990 in his lumberjack shirt and scruffy jeans…

Here is a lovely pic of the huge numbers of buttercups open in the sun at Humphrey Head, and a view across the bay towards Walney Island:

Whilst at the nursery I spent a lovely hour with the Mollster, who was flagging in the heat and looking half-asleep! Though not our dog, Molly is our little buddy and occasional house guest and  regularly features on this blog and on my Instagram. 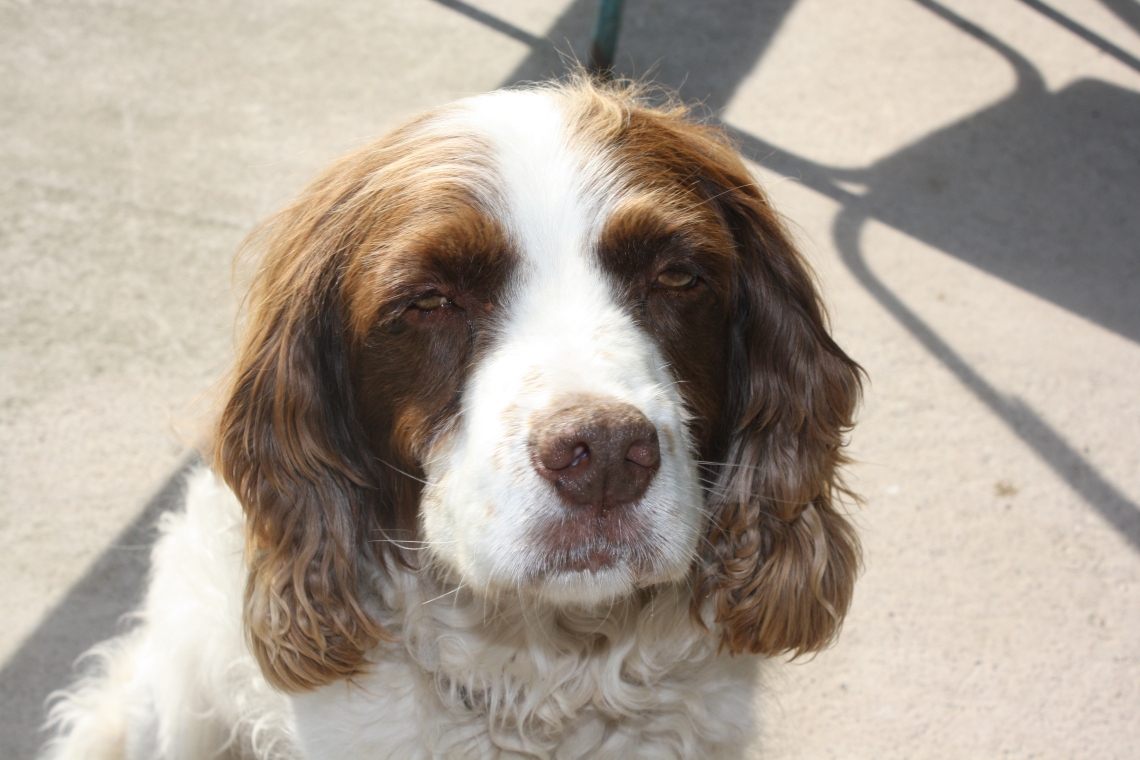 Cup cakes. Thanks to my massage therapist Carol I discovered a new vegan café in Lancaster, which happens to be just round the corner from my counsellor’s office… They make Bounty cup-cakes! I am doomed! (Note for new readers. I am addicted to coconut)

I am generally a pretty easy going guy. I grumble about the day job (who doesn’t?). I am very liberal in my outlook and a passionate defender in the right of an individual to live however they want provided nobody is hurt or disadvantaged by it. I realised around the time of the Aussie vote on same-sex marriage that it saddens and angers me that anyone considered a vote was even needed. What the hell gives anyone the right to dictate how another person lives or who they choose to spend their life with? What a person does with their own body is their own business – provided they don’t expect someone else to suffer the consequences or pick up the pieces. I have never actually had a rant on here about these subjects but now you know where I stand. (Start talking to me about religion or similar ‘moral’ codes and I will start talking about hypocrisy.)

And don’t get me started on bullying, racism, sexism, Brexit, capitalism, and all the other examples of how humanity constantly fails to live up to my hopes. For all his faults John Lennon expressed my sentiments beautifully with ‘Imagine’. Yes I am a dreamer – and proud of it.

I am working on another Moraea piece. It is slow going at the moment as it has reached that stage where I am not sure where to go next. I’ve taken a break from it for a few days and think I am ready to press on with it now. Excuse the poor phone photo!

My WP friends mean the world to me and I will keep on saying so. They have supported every step of my journey in the last few months. I might be socially awkward and introverted in real life but here I can be myself. Much love to you all.

I can’t leave this topic without mentioning the lovely collaboration blogging project with three of my friends – see the latest installment in my previous post!

There have been several contributions to my friend Linda’s ‘Guest in Jest’ series.

And a few attempts on here too:

You can often expect these on Fridays. Especially after a bad week at work. So most Fridays then…

And, as it is Friday:

These pictures are all of the Chilean bulb Leucocoryne vittata. They show a bit of variation and were all grown from one packet of habitat collected seed from the plant hunters Flores and Watson, sown in August 2001. As well as being very pretty they have a delicious scent that reminds me of old-fashioned sweet shops, but with a hint of cardamon. 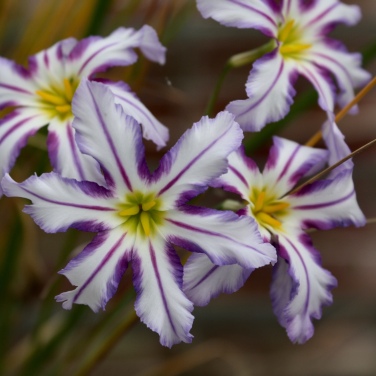 At the same time I sowed seeds of Leucocoryne odorata from the same source. This is pure white and similarly scented. It was much slower to reach flowering size though – ten years. 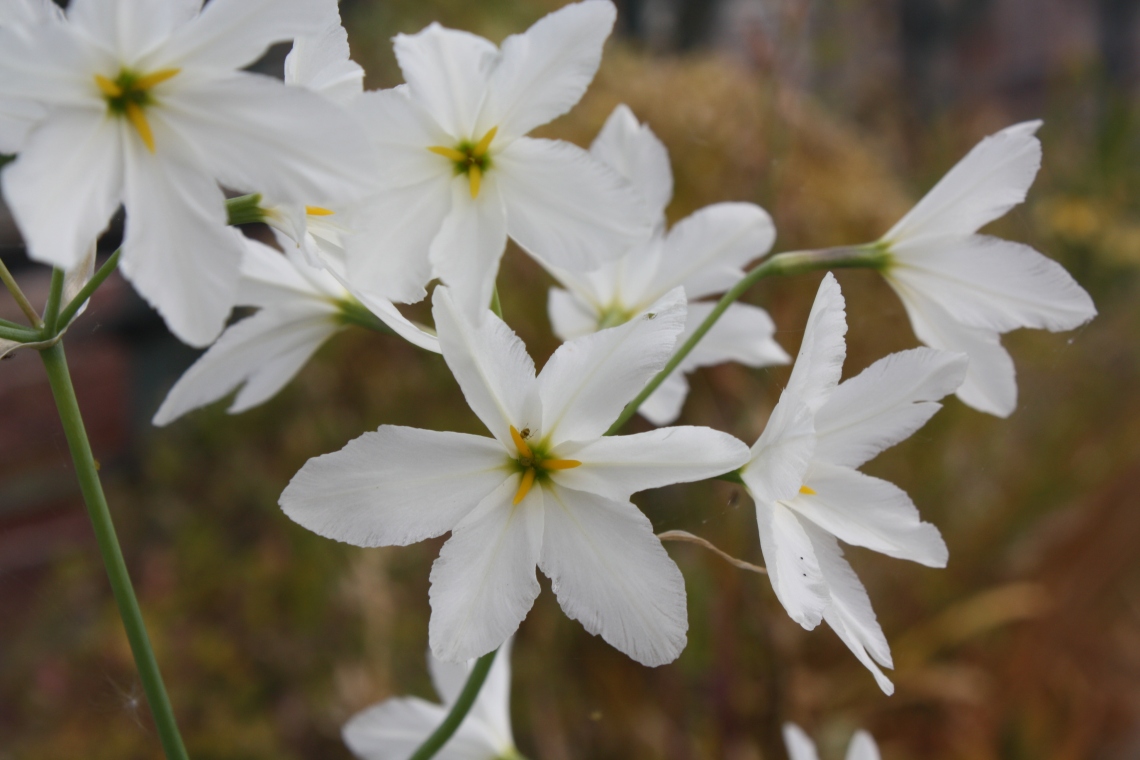 Have a lovely weekend. It is a three day one here in the UK too 🙂