Geeky plant post ahead! For those checking on my sanity, however:

This has been a really emotional week. Sunday was tough, for family reasons, but a supportive message from a friend made me approach it feeling strong and calm and it went well, although it was very tiring. The fallout from this lasted through Monday but I have been quite happy since then, with the occasional wobble.

I feel I let myself down a little yesterday. I was supposed to go for lunch with my colleagues before the campus eateries start filling up with students again next week. I couldn’t face it in the end and had to decline. Groups are hard for introverts at the best of times ( I’d much prefer a one-to-one conversation) but I also felt a bit spaced out and having trouble concentrating because I had only had 6 hours sleep in 3 days. Thankfully last night was better but I still have not caught up. I’ve been at the gym a LOT this week trying to tire myself out enough to sleep! I am also doing lab work this week, using quite dangerous materials, so being tired and spaced out adds extra interest to this…

On a positive note: the gym was lovely last night. Many of my favourite gym-buddies were there, including Ria who I have not seen for weeks so we had a nice catch-up chat. She is training to be a gym instructor herself and is very strong – I have seen her deadlift my bodyweight. I’m glad she is such a nice person or she would be scary!

Molly has arrived to stay with us. Susan had taken her to the beach yesterday in the sunshine (whilst I was stuck in the office – not that I’m bitter or anything). It was obviously a hard day running around for an old doggie so this is all the action we saw from her all evening: 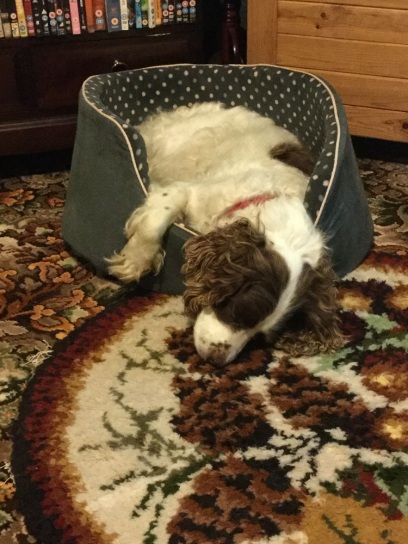 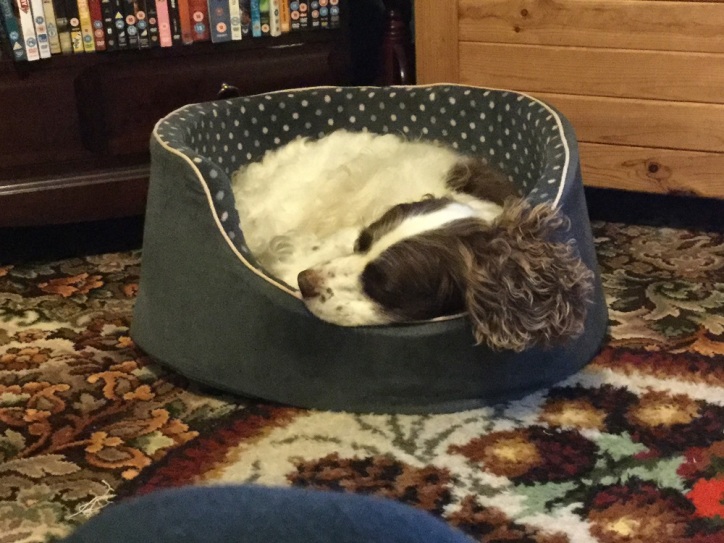 She was full of beans this morning, however, which was hard to cope with before my caffeine fix! She gave me an effusive greeting, ‘helped’ me with breakfast and explored my gym bag – which was brave as that is the last place I’d want to put my nose after the sweat my gym bag has seen this week…

So – geeky plant stuff ahead. Switch off if you like but I feel I must make some effort to keep this blog on track with its original intent! But, seriously, I have no regrets about posting more personal things as it has led to my meeting some amazing and lovely people.

Corybas has about 120 species, distributed from the Himalaya, through asia and Australasia. The more tropical species such as C. pictus are rather more strikingly marked but the two species I grow and want to talk about here are the more understated C. diemenicus and C. incurvus, from Australia. As with other Corybas, they grow in fairly damp, cool positions in the wild (for example in moss on tree fern trunks). Both these species hide away from hot dry conditions in summer by dying back to a buried tuber, only growing again once conditions become cooler and wetter in the autumn. In this respect they follow the same pattern as many ‘bulbs’ from summer-dry parts of the world.

Here in the UK they are rarely cultivated and can be quite tricky but I have maintained both these species for almost twenty years now. They must be grown under glass, kept dry in summer and cool but frost-free when in growth through the winter. After their summer dormancy I wake them up by watering in September. They are then kept just moist until the shoots appear – often around Christmas time. At this point the embryonic flower buds are just visible at the base of the leaf and must be kept in humid conditions or they will abort without opening. A simple plastic container inverted over the pot is enough. This can be removed when the flowers open, usually in February here. Slugs and snails also like humid conditions and like to eat Corybas flowers so some protection is advisable. 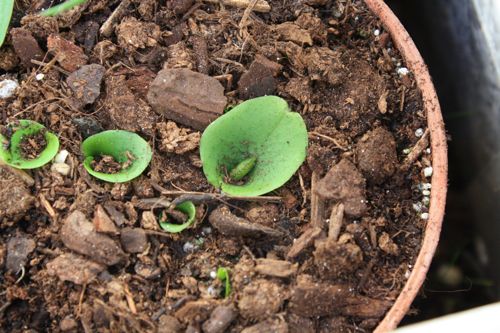 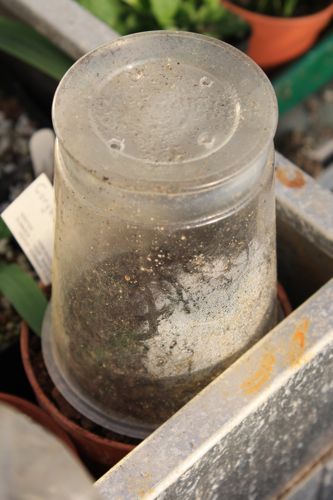 The flowers last in good condition for around two weeks. Once they shrivel they are best removed or they go mouldy. As the sun gets stronger in March I move the pots to a shady position until I let them dry out and go dormant in May and they are kept dry all summer. Every two years I repot the tiny white tubers when dormant, into a lime-free mix that is around 30% humus (composted bark or similar) and 70% mineral. Using Perlite is inadvisable as the little round white granules look just like Corybas tubers which makes finding the tubers at repotting time a challenge.