Back in 2005 I was not in a happy place. When I’m depressed my closer colleagues can usually tell because I act out a bit and my humour gets reckless. Not cruel, just a bit off-the-wall. I started writing a series of spoof scientific papers based on my discomfort of sharing a double seat on public transport (we all know that feeling). The papers became rather deranged by the time the third one appeared, with my bitterness and loneliness becoming quite obvious. Before you ask – yes I genuinely did carry out the experiments described. This is the first: 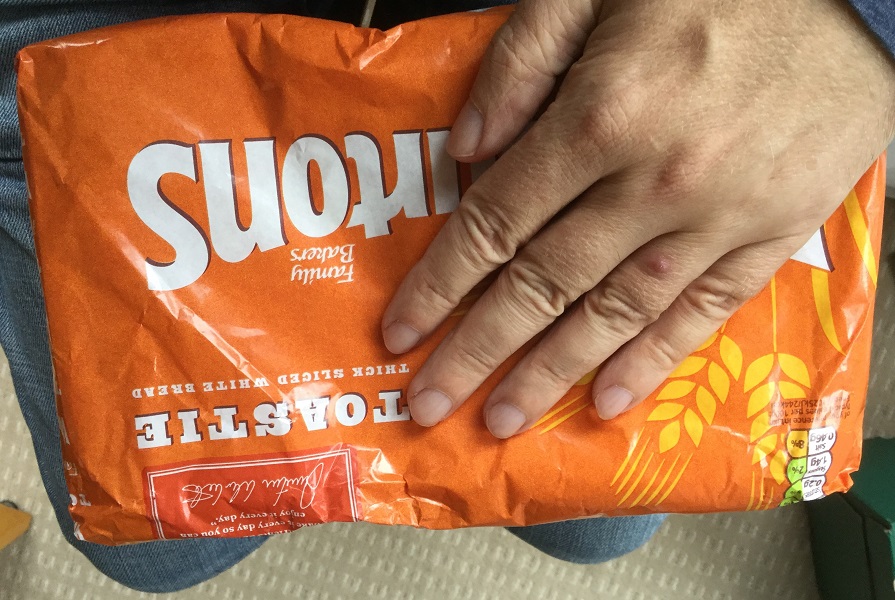 USE OF DOMESTIC FOODSTUFFS ENHANCES PROBABILITY OF DOUBLE_SEAT RETENTION ON PUBLIC SERVICE VEHICLES.

We present a possible solution to the awkwardness of sharing a double seat with a stranger on public transport. The only tools required are easily obtainable comestibles.

During the period November 2005 to May 2006 the author undertook numerous bus journeys between Lancaster bus station and Carnforth (Stagecoach Bus services 55, 55A and 555). All journeys were undertaken at peak times in the evening, between 16:30 and 18:00hrs and buses were usually busy.

Data was only collected on evenings where the author secured a double seat at the outset of the journey and where the bus was subsequently busy enough to oblige new passengers to occupy the unclaimed seat in an already occupied pair.

Experiments consisted of a control and four ‘treatments’:

Treatment 1: Bus journey with loaf of Warburtons White Toastie on knees, in silence.

Treatment 2: As above but with Warburtons Wholemeal Toastie.

Treatment 4: As above but with Warburtons Wholemeal Toastie.

Experiments were carried out randomly with regard to date and current domestic requirement for bread.

It is clear from table 1 that the likelihood of being able to retain a double seat for the duration of the Lancaster to Carnforth journey is significantly enhanced simply by holding a loaf of bread on one’s knee and talking to it whilst gently stroking it. The type of bread is not a significant factor.

The mere presence of bread in treatments 1 and 2 does not significantly enhance the probability of double seat retention, suggesting that only where the bread is the object of obvious affection (treatments 3 & 4) are other passengers discouraged, possibly as they feel they would be intruding on an intimate moment. It would be interesting to test the influence of the person carrying out the experiment by repeating the work using a person who doesn’t look a bit odd in any case, it is hypothesized that this would make little difference to treatments 3 & 4 but might negatively affect seat retention in treatments 1 & 2 and the Control.

On one occasion the author was joined by a fellow passenger who asked if they too could stroke the loaf. Clearly there is a closet community of bread fetishists in North Lancashire and persons using this technique for seat retention should be aware of this.

Preliminary experiments using a 4 pint bottle of milk instead of bread suggest that this is just as effective, as well as making the author’s knees cold.

It would be interesting to conduct this research on trains rather than buses in order to test the following hypothesis:

Sitting on the bus talking to, and stroking, a loaf of bread virtually guarantees that one will keep the double seat for exclusive personal use, no matter how busy the bus. This could be an especially valuable tool for those with social anxiety or personal space issues.

I would like to thank Stagecoach buses for providing transport. My wife Susan for financial support and assistance in consumption of experimental materials. Somerfield supermarkets for providing reliably sullen service. Colleagues at work for helping make the author crazy enough to carry out this research.