The current picture is going well, albeit slowly. The difference between the two images below represents ten hours work, which is a glacial pace even for me. I have had distractions as I’ve been unable to decide on appropriate music for drawing, without getting restless and trawling Youtube for something else, which loses me time. I’m blaming Citalopram for this – see later. 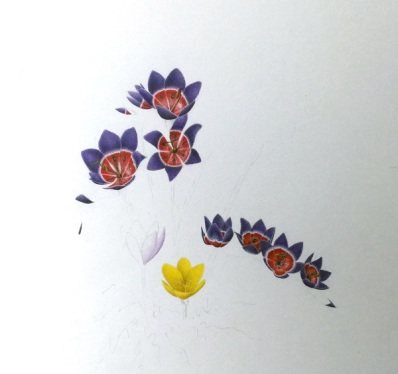 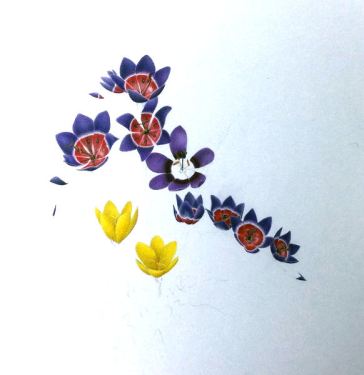 This piece, like the previous one, is a mixed composition. Most people seem to find mixed compositions more pleasing than single subject studies and evidence from card sales suggests that they sell better. My own preference (my training is as a scientist) is for more formal botanical studies showing dissections etc, but I accept most folks aren’t as geeky as me!

So – this piece is my attempt to compromise. By choosing a colourful and varied genus (Geissorhiza – a genus of bulbs, related to Iris, from South Africa) I can hopefully create an aesthetically pleasing image which also appeals to the botanical geek in me by highlighting the variety of colour and form within that genus. Feasibly I could extend this into a series by doing likewise for two other South African genera, Hesperantha and Babiana, both of which have species across a range of colour and size which might fit together in a composition.

I don’t suffer from ‘blank page syndrome’ when I start a piece like this but I do tend to get twitchy after putting the first subject in place. If it has gone well I’m always really reluctant to continue by adding anything else just in case I ruin what I have already done. In this case I was very tempted to stop after putting the first species in place (top left – Geissorhiza radians) and turn it into a single subject study. This would have been wasteful of an A3 piece of paper for a tiny end result. Once I’d taken the plunge by adding the second species (G. mathewsii – bottom right) I felt much better as I was now committed. Still anxious each time I start to add a new species or element to the composition though! I will not add leaves or stems, beyond light pencil outlines, until I am approaching the end as I find it reduces options for tweaking the composition and in this case the flowers are the primary subject as the leaves of all the species are fairly similar except the yellow species at the front (G. corrugata) which has corkscrew spiral leaves which will be highlighted by being at the front.

Speaking of yellows. These can be tricky in coloured pencil as the pencils often have a lot of wax/oil in relation to pigment. This quickly blocks the tooth of the paper and makes the surface shiny, effectively preventing adding other colours on top. For this reason it is critical to get the underlying shading right (and even) before adding yellow. Polychromos Light Violet (which is not included in any sets by the way – you can only buy it as a single pencil) is good for shading beneath light or bright cadmium yellows. I find Verithin Violet extremely useful under darker or warmer yellows and for darker shade areas under bright yellows. It will also allow you to add a little even after the yellow if you find you need to adjust shading or fill in small spots you have missed – it is amazing how these are massively magnified once you put yellow on top!

So to the mental health update: I’m still feeling good, though perhaps a little less wired than I was last week. I have learned a valuable lesson in why they advise you to avoid alcohol with Citalopram. I only had a couple of mouthfuls of beer when offered a taste at a bar – and subsequently felt very weird for the rest of the day. Sad irony of this is that I don’t drink when depressed (I learned not to a long time ago) and now I can’t when I feel cheerful enough to do so. We had an Italian meal out on Sunday night and I spent it looking longingly at the bottles of red wine behind the bar…

I’m on a waiting list for talking therapy/counselling. Decided against CBT as I’ve been there and done that, know the techniques etc. This feels different to the issues I was having at that time.

Something else I’ve noticed is that when I’ve been on medication previously it has not only dulled the depression but dulled every other emotion too. Not so with Citalopram, I’m smiling a lot more and seem to be feeling positive emotions more strongly. There aren’t enough hugs in the world at the moment for me. It isn’t neediness on my part but genuine affection. Is this how most people feel all the time? It is a bit overwhelming, especially for an introvert.

Priority has to be building a solid base to support me when I eventually ditch the medication. I’m a bit stuck with that.

This week’s music has been provided largely by the Brian Jonestown Massacre, though a lot of hopping about was also done on Youtube as I am feeling quite restless. Interestingly I found myself listening to several versions of ‘Hurt’, the original NIN version and covers by Johnny Cash and a wonderful young singer called Hayley Richman. This is a great song, which I could never listen to whilst depressed but which I can now enjoy again. I’m also finding a lot of music (even stuff I once enjoyed) just isn’t hitting the spot at the moment. I need something new!